This morning, I hopped across the border to South Carolina for the Great Pumpkin 5K and state number three.

I picked the race because of its proximity to Charlotte; the Great Pumpkin 5K is run mostly on or near the Winthrop University campus in the town of Rock Hill, less than 30 minutes from where all of my family lives in south Charlotte. Taylor’s health is declining, and I haven’t seen her at a race in a long time.  As much as I love running, I always try to remember why I run. I picked the Great Pumpkin 5K as my South Carolina race because I wanted Taylor to be the first person I hugged at the end.

Usually a stickler for race preparation, I broke almost all of the rules this week. I stayed up late every night and gorged on junk food at an office Halloween party on Friday. I ran very little in the two weeks leading up to the race after suffering a bad ankle sprain hiking in Utah earlier this month. It was still sore when I went for a quick jog this week, but I just gritted my teeth and watched out for potholes.

I have a closetful of performance running apparel. But two hours before the race, I pulled on a long dress made of fake crushed velvet and purple sequined lace and a floppy, matching hat. The stuff wasn’t made to wick sweat. But it was Taylor’s Halloween costume three years ago – the last time she went trick-or-treating. That made it magical.

I got out to a quick start. I slowed a bit midway through the race as my ankle began to throb. But I got a boost from the spectators sprinkled along the course as they shouted encouragement. Running a 5K in full costume is an effective way to attract attention. I wish I’d had a handful of Taylor’s Tale wristbands to launch at them; alas, the purple witch costume doesn’t have pockets, but I can yell “Visit taylorstale.org!” like my life depends on it.

With about half a mile to go, I knew I was near the front of the pack. I found another female runner to “draft.” I settled into a comfortable pace and waited till the final turn to pass her and accelerate into a full-on sprint. Don’t knock the purple witch dress; it’s more aerodynamic than you’d think. 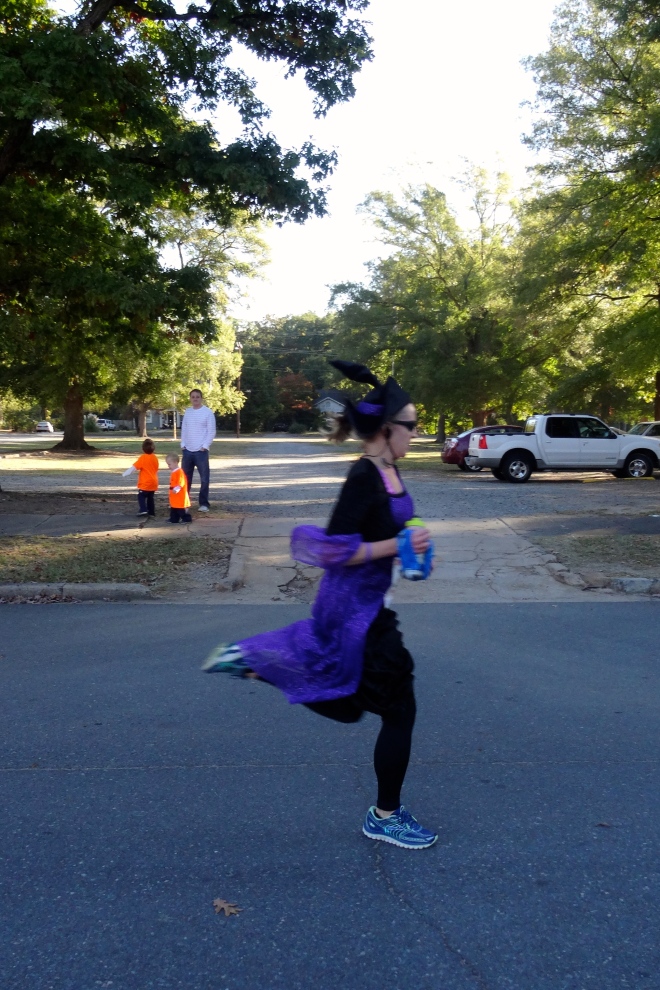 I crossed the finish line 12th overall and first in my division.

I got a big hug from my husband, John, and my dad. Later I got a hug from the runner I’d passed in the last half-mile, a woman named Dianne in the masters division. She ran Thunder Road last year, and she knew our story. I gave her the wristband on my arm as we waited for our age group awards and the morning sun warmed our skin, and silently I reaffirmed the importance of these runs for the thousandth time. But I never got to hug my sister at the finish.

Nothing about Batten disease is easy. But 2014 has been an especially rough year for Taylor. This year, my sister stopped talking. She ran two 5Ks blind, but now she’s in a wheelchair. She got a feeding tube in June. She’s been to the emergency room multiple times. Batten disease is a monster. And Batten disease is winning the battle for my sister.

All week we’d hoped Taylor would be able to come to the race, because that would mean she was having a “good” week. But yesterday was a really bad day. Yesterday marked another milestone for Taylor, and in my sister’s world, milestones aren’t a good thing. Milestones represent another rabbit hole; another point-of-no-return.

I hate Batten disease so much. I hate what it’s doing to my sister and the people I love. I hate that the Halloween Taylor wore the purple witch dress feels like a million years ago, because figuratively speaking, it was.

But I’ve got more races to run and stories to tell, and Taylor’s Tale has great work left to do. While I don’t know what the future holds, I know Taylor and I have tomorrow. And tomorrow is always something worth fighting for. 3 Comments On “Running for Taylor in 50 States: South Carolina”